Sandra Montoya-Logan is remembered here by her fellow parent volunteer, Sheryl, and their Centre for Autism Services Community and Family Services Coordinator, Gail.

Sandra did not keep her illness a secret. She graciously and courageously shared her diagnosis with me. Still, I was shocked and left speechless when I got the call that she had passed, as such a truly great person left us and heaven gained a beautiful angel. She has left a huge legacy for years to come, one nearly as big as the loss we feel at her passing. I am truly honoured to call her my friend.

Sandra and I met at the Centre’s Family Night and boy did we have fun. I may be mistaken but I think sometimes we were a little loud. Probably a lot loud! She was someone who had so many insights and knowledge she would share, and in so doing, she helped so many people, including myself. She helped and healed so many of us, and did so without judgment. Everyone who encountered Sandra would receive dignity and respect. Sandra had a voice and she was not afraid to use it – especially when it came to advocating. Sandra was an incredible advocate and promoted increased independence for autistic youth, in particular her beloved son, Ty. She taught me so much. I am so grateful to her for that. 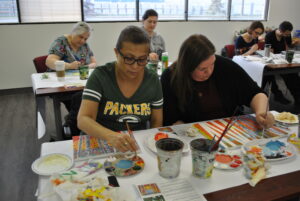 Sandra participating in Family Paint Night at the Centre.

I remember the day Gail called both of us and asked us about doing a turkey dinner for a family night event. As she knew we would, we of course both jumped on the idea. Sandra excitedly said she would do the potatoes and vegetables and I said I could do the turkey, dressing, and gravy. We thought we should get together to plan a craft as it was happening around Thanksgiving weekend. I remember Sandra being so excited and I will never forget the laughter we shared. We decided on a Thanksgiving tree to remember all we were grateful for. The evening of the event had finally arrived, and I got stuck in traffic with the turkey, dressing, gravy, dessert, and craft.  Sandra and Gail graciously entertained the group of parents who came for a turkey dinner that did not yet have a turkey. I got so many calls of ‘where are you?’ When I finally arrived, I was greeted with Sandra’s laughter. She welcomed me in, and she just said ‘well…let’s eat!’ That night, as we were finally able to sit down and enjoy the fruits of our labour, Gail came over and quietly told us that she was going to have us do family night. I will never forget Sandra’s reaction. Did I mention I have never met someone with such a great sense of humour? 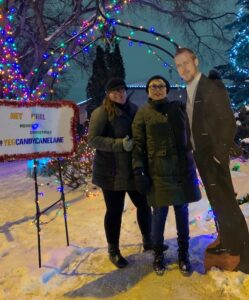 When it came to planning, there was nobody better than Sandra. She was such a planner and so organised. I never had so much fun as I did with Sandra. She organized card-making sessions and became well known for it. She would make the most amazing cards. They were so treasured by those who received them. We had planned to do card making for one of the Family Nights we organised, and she invited me to her place one evening to teach me how to do it prior to the event. She was so proud to show me the card designs she had found to make. Sandra even made templates to make it easier to follow. Despite her templates and both of our efforts, I would be able to do it while she was there, but as soon as she stepped away she would hear “SANDRA… help!” I would hear her famous sigh and ‘really?!’ followed by laughter. She would come and show me again ever so patiently. That was Sandra. 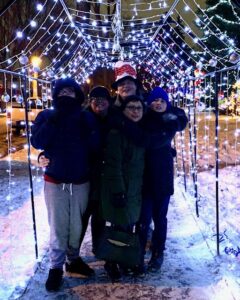 Staying cozy and taking in the sparkle at a Candy Cane Lane family event.

Sandra had a gift of drawing people close in such a special way. For those who were at the Family Night, she would always bring smiles and bountiful conversations. I think it was Sandra who thought of throwing a birthday party for parents, as she thought that most of us may not take the time to recognize or celebrate our own birthday. I recall that it was also Sandra’s idea to play Pin-the-Tail-on-the-Donkey as one of the games for Family Night. We got some interesting looks when we announced it was time to play. It was because of her kind encouragement that parents (at first slowly) took a turn with her spinning the person whose turn had come up. As the game went on, the cheering increased, more people joined the game, and the room became filled with laughter.  She kept family nights going for a long time. She had such enthusiasm and warmth for all the Family Night events and everyone who attended. 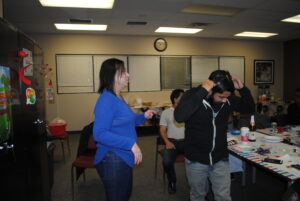 Sandra readying the next contestant for Pin the Tail on the Donkey.

I will never forget how my son Conner and I would be so excited to see her and her son Ty, not only for Family Nights but for other Centre events like Candy Cane Lane and the Zoo. We wanted to hear her stories of how things were going. We loved to be around her, as so many people did. She exuded positivity, fun, and care, and when you were talking to Sandra, she had a way of always making you feel important. She had such a wonderful attitude and outlook on life. She would say (and she also lived by the phrase) “when life gives you lemons, you make lemonade.” 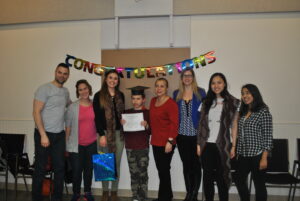 A great achievement to celebrate – Ty’s graduation from Specialized Services!

Sandra was the most supportive and giving person. If she saw someone struggling, she was there for them. If they did not have something she wanted them to have or something she felt would help them, she would see that they would have it if she could. When you got to know Sandra, you soon saw how important family and friends were to her. She held her loved ones close and made new friends everywhere she went. As I got to know Sandra and her family, I could see how strong of an advocate she was. She was willing to stand up and use her voice for things and people that mattered to her. The person who she most advocated for was her son, Ty. Ty was her world. I have not stopped thinking of Ty since I heard that she passed. She was so proud of him and loved him so much. The village of support and advocacy that Sandra helped to create will be there not only for Ty and Luke, but for countless others and for years to come. They will be touched by her life and her kindness without even having known her. 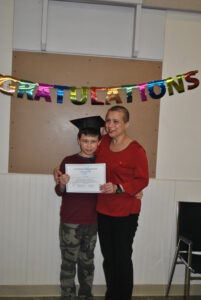 Ty and his very proud mom

This is just a glimpse of how I knew Sandra. There is so much because she meant so much to so many of us. Sandra was such a special person and her loving spirit will live on through our stories and memories, and the legacy she leaves behind will continue to support us all.